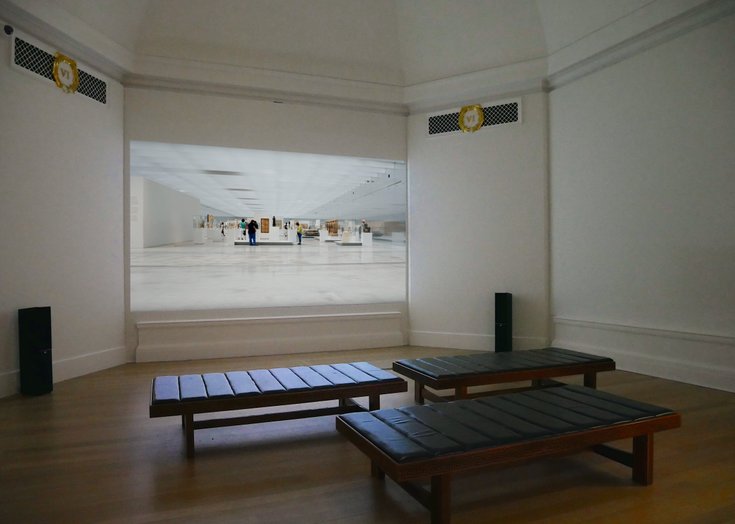 These moving image works use sound as their starting point, particularly the everyday ambient sound we filter out - electrical hum, climate control units, traffic, birdsong, aircraft noise, etc. Adopting an approach from Pierre Bourdieu, 'the understanding gaze', drawing on minimalist aesthetics, the use of diegetic sound in cinema, and the traditions of large-format photography, the works are made using an extended fixed single shot, which includes the site of the source of the sound.They are intended as gallery installations, to allow an active role for audiences, which can interact with the works as and how they choose.

Use of a good quality sound system is recommended in viewing these works online.

There is no such thing as an empty space or an empty time.

try as we may to make silence, we cannot...

With its cacophony of ambient sounds, Andrew McNiven’s Hum series, (2017-2019), a collection of moving image works-in-progress intended for gallery exhibition, embodies Cage’s ideas around non-silence and non-emptiness. Though their lack of formal direction disorientates at first, the films, most between 5 – 10 minutes long, draw you into an intense act of hearing and mesmeric watching. And yet nothing happens. Punctuated by wind and birdsong, Nomads, (2018), is a static, un-picturesque, rather banal view of a far-off sea shore seen from a scrubland of dunes and fronted by a line of parked-up motorhomes. The only events are a car reversing and a tiny windmill whirring on top of one of the campervans. In Fallenbrunnen, (2018), a prospect of an overgrown copse so pulsates with avian clamour that its physical stillness (a few leaves flicker in the breeze catching the sunlight and a black bird, zig-zags, a blurred dot, across the screen) seems an anomaly. A pristine functional interior devoid of comfort, Room 1.01, FAB3, (2019), is a classroom containing a wheeled white-board, stack of chairs and a waste-paper bin set in a line against a bare stuccoed wall. Pared-down, a cancellation of any visual moment, Room 1.01is yet made compelling by a distant, intermittent squeak of a door and a continual, faintly abrasive, mechanical noise (it’s so absorbing that it takes sometime before I notice the glass of water beneath the whiteboard). With its focus on a post-war, Eastern-European-style civic building corridor featuring a kind of dumb-waiter, door-less dual lift, Paternoster, (2018),encapsulates the Orwellian starkness of McNiven’s aesthetic. Funereal in tone, aspect, metaphor and sound, its muted palette, clunking churning of pulleys and laboured, rhythmic passing of the ever empty elevators, is profoundly beautiful. The same elegant restraint of vision and content imbues A636, (2018). With its non-descript closed curtain acting as a screened filter to the flow of traffic, it’s like some animated exercise in mark-making. The textured canvas of the drapery, at the mercy of headlights, lit and then in shadow, relays the moving bulk of a lorry against the dense line of a hedge and the static needle-like lines of streetlamps.

‘Silence has no narrative’, writes Sara Maitland in The Book of Silence, ‘(but) it does have a rhythm’. In Flughaven Frankfurt, (2018) the unseen, interior humming babble of voices at the departure gate becomes the pulse and beat that defines and drives the continuum of airport traffic outside. Be it birdsong, wind, wave, engine or, as in the case of Flughaven and Tourists, (2019), human chatter, the non-silent din of McNiven’s video works provides its cadence.

The dystopian absence of McNiven’s oeuvre - its unpeopled corridors and chambers and its empty roads and wastelands, land-marked by power stations and pylons yet made vibrant with birdsong – reveals to us, with intelligence, subtlety and craft, the peripheral architecture of man’s intervention.

In 50Hz (Audio Described), both image and sound is audio described for all audiences in a collaboration with Dr Louise Fryer of University College London and BBC Radio 3. The project aims to demonstrate how an existing practice, audio description, developed to increase access for the blind and partially-sighted, can also function as part of a creative process for all audiences.

A central interest in the work is the idea of ‘attention’ and this work aims to reframe the audience’s relationship to the sonic environment by provoking their attention through the directing-to and fore-fronting of ambient sound together with the related image.

'No', (2017, below), was made for the project 'Denial as a Leading Principal' curated for Lodge222 in Dordrecht (NL) by Frans van Lent. The work uses a celebrated slow motion scene from Martin Scorsese's 'Mean Streets' (1973). The original excerpt llustrates Walter Benjamin's idea of the camera as an 'unconscious optic'. Extra-diegetic real-time sound (the opening bars to the Rolling Stones' 'Jumping Jack Flash') is applied to heighten the sense of tension and  unreality.

In 'No' the footage is slowed down further, as is the audio track which is amplified, distorted and affords the overlaid sound greater prominence, to increase tension, and to gain a kind of 'materiality' through sonic dismantling.

Note: this work is intended for cinema presentation.